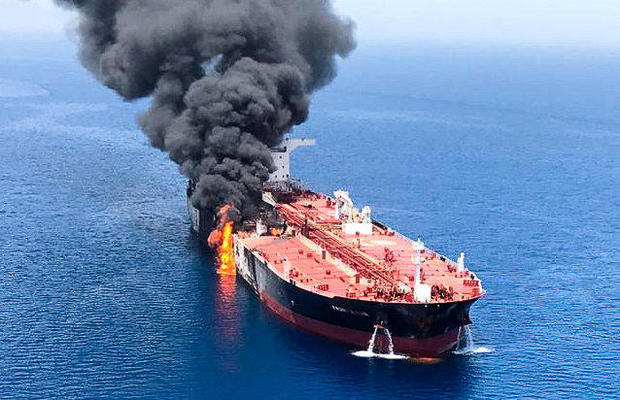 Two oil tankers were attacked on June 13 off the coast of Oman, forcing the crew members of one burning ship to flee. 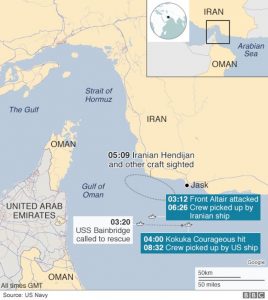 It was the latest in a series of assaults on tankers transporting oil through the Gulf. In May, Saudi, Norwegian and Emirati oil tankers were attacked off the coast of the United Arab Emirates, causing damage but no casualties. The attacks have gone unclaimed, so the perpetrator is unknown – at least publicly.

US ally Saudi Arabia, Iran’s regional rival, blamed the Iranian government and called the May attacks “naked aggression”. Saudi King Salman asked the international community to “use all means” to punish Iran.

US national security adviser John Bolton, who has called for bombing Iran to cripple its nuclear programme, has maintained that Iran is “almost certainly” responsible for the attacks. In May, Bolton announced the deployment to the Persian Gulf of a carrier strike group and a nuclear-capable bomber task force, America’s most formidable military assets.

The purpose: “to send a clear and unmistakable message” to Iran. But the White House is squabbling over its objectives, which are far from clear. Trump administration officials do not seem to agree whether the US wants behaviour change or regime change. Should the US use diplomacy or force? Are frustrated Iranians or frustrated Americans the target of this military deployment? President Trump told UK television host Piers Morgan that military options are on the table but, “I’d much rather talk”.

According to Washington Post columnist David Ignatius, President Trump “wants to sound tough (popular) so long as it doesn’t get him into a war (unpopular).” President Trump “doesn’t want to go to war with Iran,” retired General David Petraeus told.

As a scholar who has studied the onset of a number of wars, I believe these commentators underestimate the influence of shrewd warmongers like Bolton. They also fail to credit how quickly a trivial confrontation between industrialized forces can change a leader’s calculus and drag the great powers and their allies into the war. The showdown in the Persian Gulf is not like the US and the Soviet Union incrementally adjusting the balance of power, as they did during the Cold War. Mixed signals, bad timing and this kind of uncalibrated brinksmanship are how World War I began and spiraled out of control. It has brought the US closer to the next Middle East war. 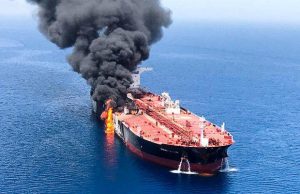 Up to the edge

Iran brokered a deal with the US, the EU, Russia, China and Germany in 2015 to curtail its nuclear programme in exchange for sanctions relief. The current standoff began in May 2018 when President Trump reneged on the deal and later implemented a new “maximum pressure” campaign against Iran, which included economic sanctions punishing countries purchasing Iranian oil.

The UK, France, China, Russia, and Germany pledged to abide by the terms of the deal. Nevertheless, US sanctions against Iranian industry at a time when Iran was complying with the deal are collapsing the Iranian economy. The White House claims its “maximum pressure” policy is working – that Iran is cutting aid to malevolent allies and proxies in the region, including Syrian President Bashar al-Assad, Hezbollah and Hamas.

US Secretary of State Mike Pompeo maintains, without evidence or a tangible timeline, that grueling economic conditions created by the US will turn frustrated Iranians against their leaders, provoking regime change. 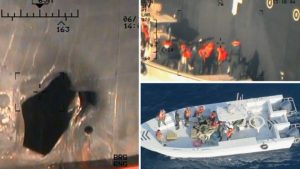 That idea seems to me to be magical thinking. US belligerence, especially when it has been rejected by the broader international community – as it is now by parties to the 2015 nuclear deal – is more likely to turn Iranians against the US, polarise US allies and strengthen Iran’s hardliners. Cosmopolitan Iranian youth, for example, who are the best hope for peace with the US, are the most likely group to turn against their government – but not if the Trump administration strangles their economy and threatens to invade their country.

In the meantime, Iran’s economic troubles are narrowing its options. According to the International Atomic Energy Agency, Iran has accelerated uranium enrichment and intends to quadruple production, in violation of the nuclear deal. Attacks on US forces or allies, including Israel, are becoming increasingly appealing to Iranian leaders to give Iran some leverage against the US. The prospect of economic collapse under draconian sanctions by the US also provokes Iran’s leaders to instigate a confrontation sooner rather than later, while its military and proxies are strong. Iranian President Hassan Rouhani has given Germany, the UK, France, China and Russia 60 days to honor their promise to buttress Iranian energy and banking sectors before taking additional steps to withdraw from the nuclear deal.

Iran’s economic and military weakness also encourages its leadership to cooperate more closely with America’s foreign adversaries, including Russia, despite Iran’s aversion to ceding precious influence in the region. If the Iran-Russia relationship tightens, it will result in even greater tension with the US. Increased Iranian-Russian cooperation is also an invitation to US leaders to strike before US troops find themselves facing an emboldened Iranian military reinforced with Russian equipment and know-how.

With each day of US sanctions, Iran’s leaders become increasingly desperate, with diminished leverage should the two countries face off on the battlefield or at the negotiating table.

With tensions rising, the US has sent an additional 1,500 troops to the Middle East. Iran’s 60-day ultimatum to parties to the nuclear deal expires in early July. According to Supreme Leader Ayatollah Khamenei, “Negotiation has no benefit and carries harm.” Iran experts Colin Kahl and Jon Wolfsthal warn, “Bolton’s preferences, not Trump’s, are winning out.”

There is still time for President Trump to extract the US from this dangerous standoff that he allowed to escalate.Trump’s greatest hope lies in Japanese Prime Minister Shinzo Abe. Japan, which is not a party to the 2015 nuclear deal, is a major purchaser of Iranian oil and Abe is perceived to be a neutral broker. Abe is visiting Iran this week – the first Japanese leader to do so in four decades – and will meet with Supreme Leader Ayatollah Khamenei and Prime Minister Rouhani to discuss the standoff. It is unclear what Abe can accomplish in this overheated climate. A potential solution lies in intense, nuanced diplomacy where the US, building on the 2015 nuclear deal, trades sanction relief for slightly tougher limits on Iran’s nuclear programme.

This includes renegotiating the restrictions on Iran’s centrifuges, mandatory international inspections, and its accumulation of nuclear material. A slightly modified nuclear deal like Trump’s slightly modified trade agreement with Canada and Mexico can be recast as a victory by all. Trump emerges as a peacemaker and potential contender for the Nobel Prize. Iran’s leaders can then right their economy.

Trump’s winning outcome, however, is not the outcome Bolton has long advocated. For decades, Bolton has publicly agitated for preventive strikes against Iraq, North Korea, and Iran. Only grudgingly, perhaps for fear of losing his job, has Bolton acquiesced to a policy of behaviour change over regime change. This is the price Bolton pays to remain the president’s national security adviser – filterer of Trump’s intelligence reports, first one in and the last one out of the room whenever the president is discussing matters of war and peace.

If Abe fails, the current Iran crisis may yet become the culmination of Bolton’s lifelong ambition. When new explosions rock the Persian Gulf, US troops are injured or killed by Iranian proxies in Iraq, or Iranian-made drones pepper the Saudi skies, will President Trump resist the urge to escalate? 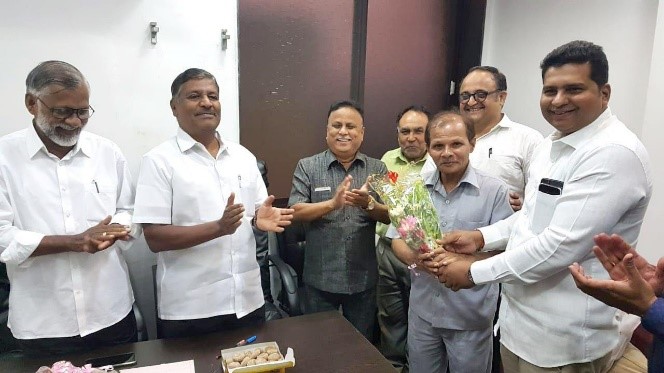