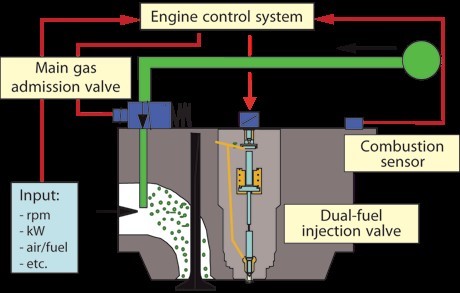 In this process, a very small percentage of between 1 and 10% liquid heavy fuel or diesel oil is injected. 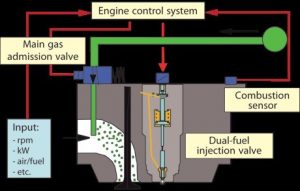 During the intake stroke, gas is admitted just before the inlet valves. The liquid fuel ignites the air/gas mixture.

The advantage is that the exhaust gases are cleaner than when heavy-fuel oil or diesel oil are combusted. Gaseous fuel contains fewer carbon atoms than a liquid fuel therefore reducing CO2 production. The emission of soot particles and the sulphur content are significantly reduced. Contamination of the engine decreases.

The dual-fuel engine principle. The diesel process is retained.

As the piston moves downwards, a mixture of air and gas is drawn into the cylinder. The gas is injected in the inlet channel via a solenoid valve.

Just before the top position of the piston, the fuel is injected into the cylinder under high pressure. This ignites immediately causing the air/gas mixture to ignite. Afterwards, the normal process takes place.

The one fuel, gas, is admitted just before the inlet valves during the induction stroke. Gas and air are intensively mixed. The air factor is between 1.5 and 2.0. This is known as a ‘poor’ mixture. 50 to 100% more air volume is present than required to fully burn all the fuel chemically. At the end of the compression stroke, the very small amount of injected fuel ignites immediately followed by the rapid ignition of the air/gas mixture. The ‘Pilot’-injector replaces the traditional sparkplug. The process continues according to the diesel principle, which has a higher efficiency than the Otto-principle.

Methods of Introduction of Natural Gas into the Engine

Admit low pressure gas through gas admission valve when exhaust valve is closed and when pressure in the cylinder is low. Gas is compressed along with the air and the mixture is ignited by a pilot injector which inject small amount of fuel oil to the combustion space or using spark plugs (for small engines).

In the case of pilot injector, the injection of fuel oil into the combustion space result in ignition of fuel and thereby gas. The disadvantage of this method is that it produces knocking and comparatively less efficient.

Natural gas is compressed to around 250-300 bar, injected to the combustion space at the same time as that of pilot fuel injector. This method is found to be more efficient. 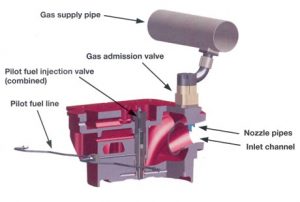 In “Fuel Oil Only” mode, gas supply will not be available, and engine runs only on fuel oil. This mode is used when engine is unstable, such as during restricted waters, heavy weather, manoeuvring, etc.

Apart from automatic shut down system, gas supply must be able to shut manually from engine starting platform or other control stations. 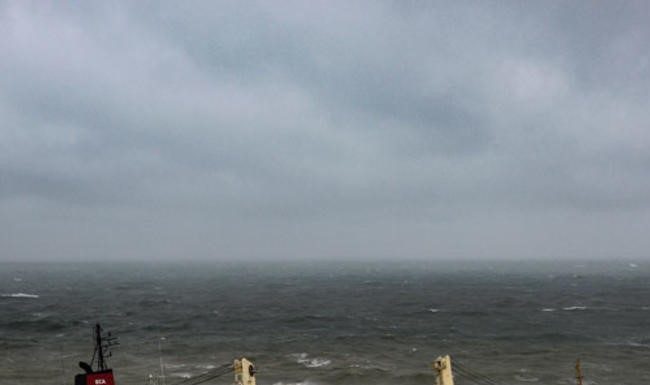