As per recent energy report, 60 percent of the power produced on board ship is used to operate motors pumps. These pumps are controlled by traditional control valve, hydraulic and turbine methods. The average pumping efficiency is less than 40%. Hence there is much room for improving energy efficiency in pumping systems. 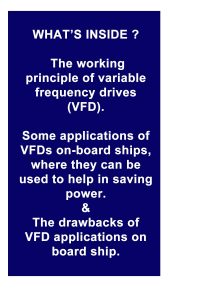 VFD is a device which is used to vary the speed of a 3-phase induction motor. It works by changing the frequency of the power supply to the motor, the motor speed being directly proportional to the supply frequency.

VFD provides precise control of pressure, speed and flow and can save up to 50% of energy. There are many ways to save energy by using variable frequency drives, depending on the type of application. For variable torque applications, like fans and pumps, simply reducing the speed will lead to a significant reduction of energy consumption. Fans and pumps are variable torque applications. As speed increases, the torque increases exponentially. If we can run the motor at a reduced speed, we will need less torque, which would mean less current and less energy.

Most of the fans and pumps operational on ships are usually of over-capacity, so there is a possibility of operating at reduced speed. Two such applications which have the fastest payback, in some cases even less than a year are:

 Sea water pumps
 Engine room fans
To estimate the potential of energy efficiency, we need to go back to the design phase of the vessel. Depending on the nominal load and speed, decisions are taken regarding:
 Main engine
 Auxiliary machinery
 Cooling needed for above applications
This calculation is based on the worst case scenario, which is 32oC sea temperature, full load, nominal speed and over sizing due to foul hull, bad weather etc. However, not all these will happen at the same time. Another very important factor is slow
steaming of ships due to recession. Ships today operate at a slower speed than the nominal, in order to burn less fuel, a practice which leads to less heat production and thus the need for VFD is a device which is used to vary the speed of a 3-phase induction motor. It works by changing the frequency of the power supply to the motor, the motor speed being directly proportional to the supply frequency.

Drawbacks of VFD applications on board ship

Harmonic currents flow back to the network of the ship. This will result in voltage distortion too and if we have other instruments or electronic devices, they will be supplied by a power of low quality and may malfunction or give rise to false readings. Also, components may need to be over sized, for the additional harmonic currents. We may also have resonance with capacitors and destroy them. Harmonic mitigation solution used, consist of simple DC chokes, which are embedded in most drives. Even if we already have high harmonics or we want to use drives for many we can choose among many harmonic mitigation solutions.

Issue of leakage current
Another issue to consider is the leakage current. These filters have a leakage current to the ground, which of course will give an alarm through the insulation monitoring system. These leakage currents come through the filters of electromagnetic compatibility, so we have to disconnect them from the ground through a special switch which each drive has.
Problem of voltage peaks
The voltage output of the drive is a series of pulses, which lead to a sinus current. These pulses are not perfect. If we observe through an oscilloscope, we will see that during the rise phase we have a small overshoot. This overshoot will be much higher if the capacitance of the cable is high. As we have to use shielded cables, we are going to have a high capacitance and increased overshoot.
As a conclusion, we can say that the use of speed drives is an effective way to reduce energy consumption on vessels:
 It is cheap compared to other solutions
 It is easy to install
 It has a very fast return on investment
 Issues associated with the use of drives on ships (EMC, Harmonics, Voltage peaks) can easily be solve 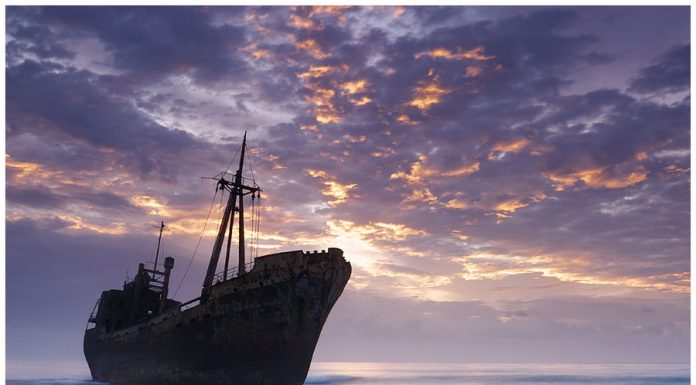