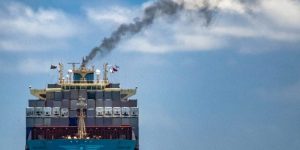 With effect from January 1, 2020, in correspondence with a mandate from the International Maritime Organization (IMO), the acceptable percentage of sulphur in marine fuel will fall substantially, from 3.5% to 0.5%.

This emerging change, known informally as IMO 2020, could pose a major alarm to the markets and business practices of oil refiners, shipping companies, and other stakeholders.

Precisely how alarming the situation proves to be—and, critically, how long it lasts. It is influenced by several factors, including the speed at which refiners can produce compliant fuel and the specific strategies that shippers employ to meet the challenge.

THE IMO AND THE MANDATE

The IMO is the United Nations body responsible for regulating the shipping industry. As part of its charter, it is bothered with curbing pollution from ships—and sulphur emissions are particularly very polluting. Hence, the IMO made the decision in the year 2016 to impose a markedly lower global standard for the permissible proportion of sulphur (by weight) in marine fuel, with the ruling to become effective in 2020. The IMO had commenced on a series of regional sulphur reduction efforts starting at the turn of the century by instituting so-called emission control areas, in which the allowable level of sulphur would be much lower than elsewhere in the world. IMO 2020 transforms that aggressive sulphur reduction effort, which had been regional, into a global campaign.

Originally, compliance with IMO 2020 among shippers was estimated to be low: some shipping companies delayed taking the necessary actions because of doubts about the actual launch date and whether, or how aggressively, regulations would be enforced.

Now, however, the degree of compliance among shippers seems likely to be high. Shippers will certainly have incentive to comply. Major ports, as well as insurers, will demand that ships use compliant fuel. The shipping industry is also relatively consolidated, which limits the number and percentage of ships in the global fleet owned by rogue operators that might be inclined to ignore the mandate. Finally, in late 2018, the IMO approved a so-called carriage ban that prohibits the transportation of noncompliant fuel by ships that lack scrubbers (technology that removes polluting sulphur emissions from ship exhaust). This regulation, which is scheduled to take effect in March 2020, reduces the likelihood of ships switching fuels at sea.

THE ALARMING SITUATION AND ITS IMPACT

IMO 2020 stands to sharply decrease demand for high-sulphur fuel oil (HSFO), which has 3.5% sulphur content and represents the vast majority of marine fuel currently sold, at a rate of nearly 4 million barrels per day. Simultaneously, IMO 2020 will raise demand for very-low-sulphur fuel oil (VLSFO), which has 0.5% sulphur content. (See Exhibit 1.) This dynamic will result in a substantial widening of the price spreads between HSFO and VLSFO, which will have major implications for the stakeholders and shippers.

Preferring to fuel vessels with more expensive VLSFO would cost the shipping industry dearly—an additional $60 billion in 2020 over current fuel costs, according to one estimate. There might also be logistical hurdles associated with this strategy. The availability of VLSFO will be restricted relative to expected demand, at least initially, as refiners work to boost supply by increasing yields and initiating new projects. (See Exhibit 2.) Fuel compatibility issues may arise as well, with potentially critical inconsistencies emerging among fuels produced by different suppliers.

Some shipping companies might turn to marine diesel, an established fuel that poses no compatibility risk, for their fuel needs. But marine diesel will be the most expensive option among the oil-derived products. Liquefied natural gas (LNG) is yet another alternative for shippers. But the high cost of engine and infrastructure conversion and the logistics of on board storage as the LNG tanks take up considerable space. It will likely dissuade a critical mass of shipping companies from following it, at least in the near term.

In the longer run, as the global fleet of vessels turns over, LNG could become increasingly popular as a fuel, especially if pressure to reduce emissions intensifies. Scrubbers could be yet another applicable choice for some shippers. But scrubbers are quite expensive—retrofitting a vessel requires an investment of $2 million to $3 million and other than that its installation is a time taking affair of up to six months. Scrubber installation is also hindered by shortages of skilled craftsmen and necessary raw materials, such as high-quality steel and chrome alloys. In addition, the open-loop scrubbers now being installed could prove to be a short-lived option, given environmental concerns about putting sulphur directly into the water.

Regardless of what path shippers ultimately choose, they will try to pass along their costs to customers. How successfully they will be able to do so remains to be seen. 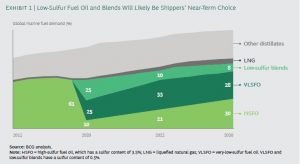 Meanwhile, refiners will strive to keep up with soaring demand for VLSFO. Complex refineries that can convert high sulphur (or sour) crudes to low sulphur (or sweet) products, including VLSFO, and maximize their production of distillates— which can be used to make compliant fuel, such as marine gasoil (MGO), a fuel that could rise sharply in demand—could see their margins surge. Simple refineries that mostly produce HSFO and have relatively low distillate yields will have greater difficulty maintaining their margins.

Simultaneously, refiners will struggle to work through falling demand for, and a resulting oversupply of, HSFO. Ultimately, they will have to lower prices on HSFO until it reaches the point where it can compete on price with natural gas as a fuel for power generation. These price reductions will diminish refining margins. But the effects will be more than made up for by higher market prices for VLSFO and middle distillates, leaving most refiners, particularly complex refiners on the US Gulf Coast, with substantially higher margins than they had before the disruption. 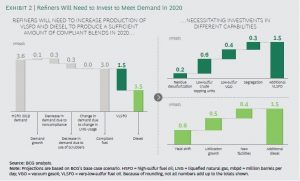 A further widening of price spreads between sweet and sour crudes is likely to occur. Oil derived from US shale fields will be regarded as increasingly attractive, and thus command a rising price premium, due to a sulphur concentration that is lower than that of oil from other sources. Logistics bottlenecks that may emerge as markets adjust to the changing demand picture, however, could reduce this premium.

The Degree and Speed of Scrubber Adoption. This factor will be the most influential of all. Widespread adoption of scrubbers would allow shippers to continue to burn HSFO, thereby curbing the price spreads with VLSFO. But few ships are currently equipped with scrubbers and, as discussed, there are limits to how quickly the industry could install them. Less than 2,000 are likely to have scrubbers by 2020. And that number will climb only gradually, rising to about 11,000 at most by 2025.

Actions to be taken

This alarming scenario will significantly affect individual energy companies, particularly simple refiners and producers of sour crude, which will have limited options for creating higher-value fuels. Companies that could suffer substantially from higher fuel prices include heavy users of transportation fuel, such as shipping companies, airlines, railway companies that use diesel-powered trains, and freight-transportation businesses.

The shipping companies, should include finding a plan for fuel use and putting contingency plans in place. Another critical action is to identify and test different ways of passing on higher fuel costs to customers to ensure that revenues are not negatively impacted by higher fuel costs or customer migration.

The refiners can and should to ensure that they can operate efficiently and without interruption through 2021. Appropriate measures include inspecting equipment and making sure that spare parts for critical equipment are secured or readily available. Refiners should also take steps to prepare for the oversupply of HSFO. Such as developing an action plan to blend, store, and trade products to exploit arbitrage opportunities; identifying power generation facilities that represent HSFO demand; and, in the case of simple refiners, identifying complex refiners that are potential HSFO buyers.

Traders, particularly those with physical assets are in a position to translate the changes in the market surrounding IMO 2020 into additional physical assets and potentially lucrative financial positions. Some traders have already installed scrubbers on their fuel ships; traders should also consider engaging in swaps and in offsetting positions on the forward curve. Traders that combine such moves with the ability to store crude could find that IMO 2020 and the associated disruption could more than offset any lost or reduced revenue caused by lower volatility and prices in the market in recent years.

IMO 2020 will affect multiple stakeholders for sure, but it could weigh particularly heavily on refiners and shipping companies. Most refiners and shipping companies can take steps to raise their opportunities of emerging in relatively good shape. Though the time for taking many of these actions is limited because the alarms is nearly at hand, many investments, even if made late, will still likely to prove profitable. 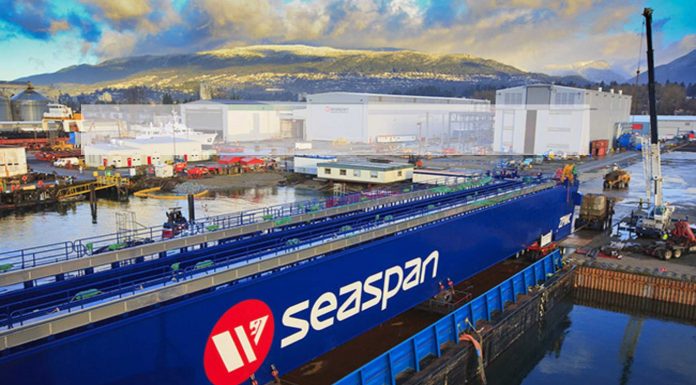