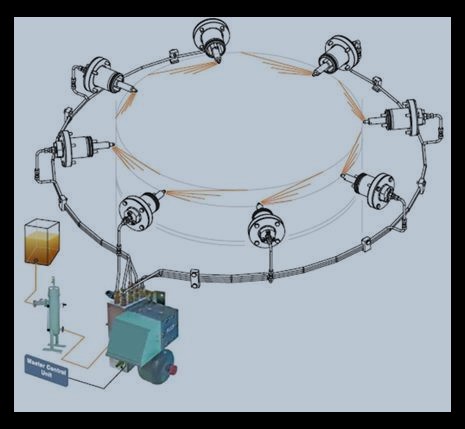 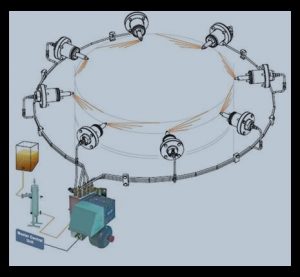 Cylinder lubrication is an accessory applied to facilitate the operation of a two- stroke crosshead diesel engine. Failure in operation may cause considerable damage and can render an engine inoperative. All four cylinder lubrication systems described and considered below are assumed capable of performing their function with satisfactory stability and reliability, to be relevant in search of efficiency.

As conditions for different engine installations vary considerably, conclusions on efficiency evaluations may differ when it comes to the choice of cylinder lubrication system. In that light comparisons between systems are excluded, but features affecting operating efficiency are presented.

Cylinder lubrication is performed for several reasons, which are here listed in the order of importance:

In light of traditional shipowner focus on low liner wear, and as both Wärtsilä and MAN B&W specify corrosion as the major cause of liner wear, acid neutralization must be given highest priority for attaining efficiency in normal operation.

To provide an initial overview, the CLSs presented in the following are shortly grouped and 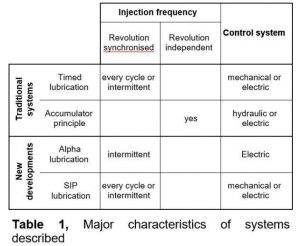 introduced in Table 1, listing their major characteristics. The focus is on two traditionally applied systems, and two new developments, each with their individual design and functional features.

Predominantly in the past, there have been two CLSs, based on Timed Lubrication (MAN B&W & MHI) and on Accumulator Lubrication (Wärtsilä [Sulzer]) respectively.

Common for these systems has been the injection of CLO in drops to be distributed over the surface of the liner through a circumferential zigzag groove, as the pressure difference over the piston rings presses the oil to move in the groove, and vertically distributed by the movement of the piston rings as illustrated in fig. 1.

Fig. 1, Principle for traditional distribution of cylinder oil on the cylinder liner wall

The effectiveness of the method is confirmed through the many years of application, but the 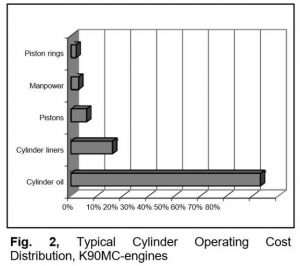 efficiency can be questioned based on absolute CLO consumption increase over the years and the cost distribution seen in fig. 2.

The purpose of timed lubrication, as shown in fig. 3, is to deliver CLO to the sliding surfaces in the cylinder at a specific time in relation to the position of the diesel engine piston during its upward movement:

The oil is pumped into the cylinder when the piston rings pass the lubricating orifices, during the upward stroke. (MAN B&W project Guide 1987). 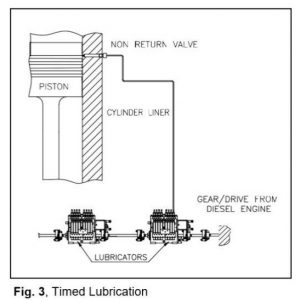 The CLO quantity delivered from the lubricators can be adjusted manually and/ or automatically. The oil is supplied through non-return valves to the diesel engine cylinder, where the piston rings distribute it to the cylinder liner surface. To attain the aim of correctly timed lubrication with mechanical lubricators the possible “accumulator” effect in the supply tube from the lubricator pump to the injection valve in the liner wall has to be considered. If the supply tube is kept under a sufficient pressure by the counter pressure in the non-return valve, the desired injection timing is achieved.

If the non-return valve pressure is insufficient – as for most engine applications today – the above-specified requirement to timing is not attained in practice.

For timed lubrication, various methods have been applied to attain a higher degree of efficiency than the basic CLS design includes. Of these can be mentioned: MEP/BHP dependent regulation, LCD regulation, Intermittent lubrication etc. In short, these possibilities can be described:

MEP/BHP denotes an adjustment of the stroke in the lubricator oil pumps to correspond to the mean effective pressure or the actual engine load. The system is a natural consequence of specifying the required CLO consumption as a function of engine load defined as g/kWh. Load dependent regulation, is applied with advantage on many rpm-dependent engines, but has “only” found general application on engine installations with fixed rpm.

LCD is short for Load Change Dependent, and is a method of increasing CLO injection for short time periods, when thermal instability in the cylinder due to load changes may cause exceptionally high risk of corrosive and frictional wear. Increased injection of oil is desired at these times to neutralize acid build-up and reduce friction. Increased lubrication at manoeuvring, engine stop and start, works as a kind of conservation and priming.

Only few engines have been equipped with this solution. Even fewer have operated with the system in use, due to insecurity as to validity of signals from applied control system.

Accumulator lubrication on Sulzer engines takes place at two levels in the cylinder liner, which, all things being equal, will give a better distribution of the CLO on the cylinder surface than if it had been delivered to only one lubrication level. As the lubrication is asynchronous with the diesel engine piston position, the lubricators can be driven by an engine independent drive e.g. with a hydraulic or an electric motor. 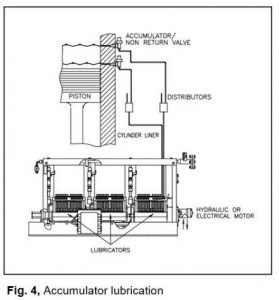 The CLO, which is delivered from each lube point in the lubricator, is divided by a distributor to more accumulators in the cylinder, however, in such a way that all the oil from one lube point is distributed to the same lubrication level. Thereby it is possible to lubricate with different quantities in the various lubrication levels. This is desirable in order to distribute the CLO best possible according to the assumed need.

The system allows pre-lubrication of the cylinder, as the lubricators can be operated independent from the engine revolutions. Likewise, in operation the asynchronous drive allows load dependent quantity adjustment by regulating the pumping frequency of the cylinder lubricator.

Recent years have seen actions towards solutions in line with today’s understanding of the technology and efficiency requirements. In our view, this process is far from finished.

Below is described two new CLSs. They have completely different backgrounds and intentions for the development process.

Achieved with both is an improvement in efficiency, but the coming challenge shall be to look at conventional principles such as:

The process of re-evaluation of established truths has begun, but is far from completed.

Important factors “outside” the CLS influencing the over-all cylinder lubrication efficiency are in alphabetical order:

The challenge lies in the ability to distinguish, prioritise and limit the number of factors and parameters considered in the future development to the ones actually providing measurable efficiency improvements in practical application

Development in the field of cylinder lubrication has begun, sparked by different factors. The two most important ones being:

The introduction of common rail systems on the engines and thereby the exclusion of camshafts may initially be seen as a similar factor to do so. This, however, is not correct, as there are several ways of establishing a lubricator drive, meeting the needs for applying CLSs of traditional type as described above. This is for example confirmed on the RTA-Flex engines where accumulator lubrication is applied.

Fig. 5 shows schematically the principle of the Alpha lubrication system. 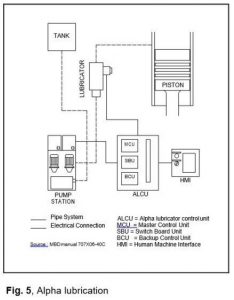 Alpha lubrication is based on the principles of timed lubrication, but is performed with new equipment developed to improve the timing based on the philosophy that an improved timing gives possibilities for saving cylinder oil. 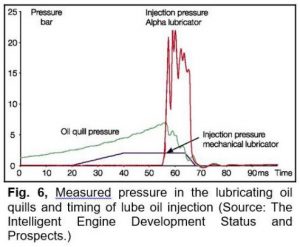 The timing is determined based on signals indicating the position of the diesel engine crankshaft. These signals are processed by a programmed control unit ALCU (consisting of the units MCU, SBU, BCU and HMI as described in fig. 6). As the timing is executed with electric signals, it is possible to change the injection timing as the engine is running. The injection of the CLO is controlled by a solenoid valve directing the pressure from the pump station to the lubricators.

Each lubricator is equipped with more supply pistons, which supplies a fixed pre- adjusted quantity per injection. As the lubrication is timed, the total lubrication quantity is controlled by the number of diesel engine revolutions during which injection is skipped. Lubrication typically takes place during each 4th to 7th diesel engine piston stroke. I.e. intermittent lubrication is applied.

The application of electronics and hydraulics in Alpha Lubrication gives and takes flexibility. It is possible to apply sophisticated algorithms for calculating proper CLO quantity, but at the same time, the possibility of injecting fresh (alkaline) CLO at every engine revolution does not exist.

As introduced at the CIMAC conference in Hamburg May 2001, the Swirl Injection Principle (SIP lubrication) system was developed based on a desire to attain operating efficiency based on a re-thinking of the application and not least the use of the CLO.

The principle is not tied to the technology of timing and dosing the CLO, but to how the oil is distributed on the cylinder liner wall, in order to give a good circumferential distribution and an adequate (alkaline) oil film with as little oil as possible. 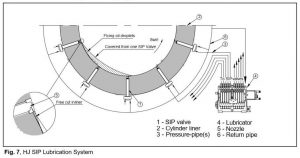 Applying lubricators similar to solutions for conventional timed lubrication – but with pressurized valves and spray nozzles instead of conventional non-return valves in the liner wall – it is made possible to inject a spray of droplets tangentially to the cylinder liner wall. This allows (with proper injection timing) an oil film to develop over a horizontal section of the liner wall before the piston rings pass in the upward movement and take care of the final vertical distribution. As distribution takes place by spraying the oil to the cylinder surface, the traditional zigzag groove is no longer necessary. Instead, a small injection groove is required to allow the cylinder oil to pass on its way to the cylinder liner wall. Please refer to fig. 7.

When injecting the spray of CLO droplets timed just after closure of the exhaust valve, and while a steady scavenging air flow still exists, the swirl carries the droplets to settle on the liner wall as desired, and no emission of oil mist takes place. Please see fig. 8. 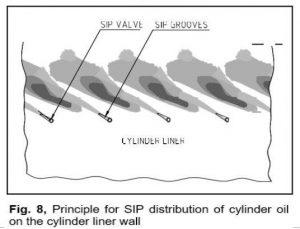 SIP lubrication is based on delivery of fresh CLO at every diesel engine piston stroke to have fresh alkalinity to neutralize acid from the combustion of the sulphurous fuel.

The SIP valves (fig. 9) are designed according to the same principles as traditional fuel valves. 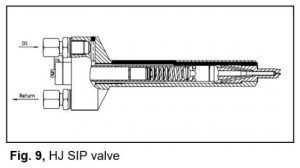 SIP lubrication is applied based on the principles shown in fig. 10 and fig. 11. As can be seen from the system design, either a mechanical connection or an electric shaft can provide the synchronization between the crankshaft movement and the timing of the cylinder lubricator pumping. 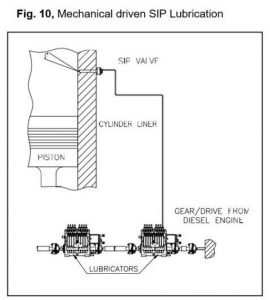 The challenge will be to maintain operating efficiency as the aim for the future. 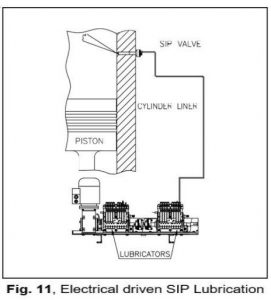 To shed the limitations of a purely mechanical cylinder lubricator to feed the oil to the injection valve of the SIP system, R&D is ongoing to provide further possibilities. It is too early, however, to go into details and establish if such new ideas will actually bring considerable efficiency advantages. It will, however meet possible requirements for having an alternative based on new-technology-application.

The CLS developments add complexity to the selection of system to be applied, but also give previously unknown possibilities for achieving the sought efficiency based on a case-by-case evaluation. Additionally it gives a platform from which to influence and support further developments in the field.

New functions and new equipment may induce shipbuilders, -owners and – managers to change attitude towards cylinder lubrication. Maybe reductions in CLO consumption can even justify shorter lifetime to wear components such as piston rings and cylinder liners, everything else being equal. The recent developments may just have scratched the surface of completely new possibilities.

With due consideration to customer confidentiality, a considerable and broad expertise has been attained in the field of cylinder lubrication systems. This experience is applied to all new developments and in our advisory functions, to the benefit of our business partners. 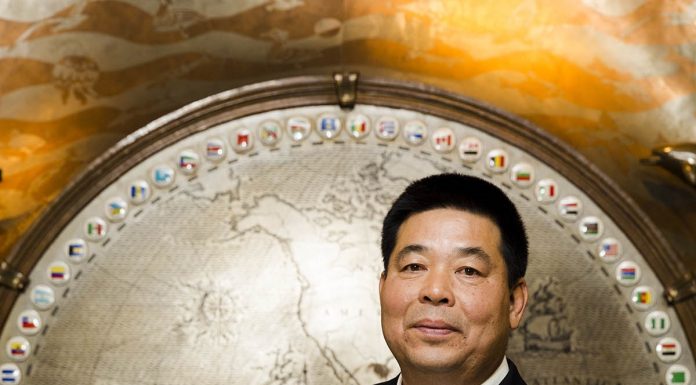